Known for its breathtaking scenery and fascinating Maori culture, this intriguing country also has its fair share of spooky places.

Step inside the spookiest spots this island nation has to offer - if you dare!

Known for its breathtaking scenery and fascinating Maori culture, this intriguing country also has its fair share of spooky places. It's one of the youngest nations on earth, having been uninhabited until the 13th century, when it was settled by Polynesians who founded the Maori culture. So, while the New Zealand doesn't have the many crumbling castles of the UK, it does have plenty of old buildings in which the lingering spirits of former residents are said to remain.

Set above limestone caves with trickling underground streams, sacred to the Maoris, this hotel was bound to be haunted. In local legend, the caves are said to contain supernatural beings who entice the unwary to their doom. As if that wasn't enough, the area was the site of two large battles fought between Marori tribes and, centuries later, against the British. So the area has a history of turmoil, making it ripe for a haunting or two.

You couldn't get much more impressive a haunting than a ghostly Maori princess. She is said to stalk the Victorian wing of the hotel, after being shot and killed while trying to meet her British soldier lover. The spectral princess now hangs around in room 12, pulling the bed clothes off startled guests and mischievously tickling their feet. A young man reportedly committed suicide in room 14 and, like a horror from a Stephen King novel, the bath in this room has been said to drip red with blood.

A kitchen boy who died in an accident at the hotel is said to appear to children wanting to play. Poltergeist activity has been reported in room 12a, and room 25 is haunted by a bossy former matron who makes sure her presence is felt.

One of the oldest still standing structures in New Zealand, this refuge is reputed to be anything but homely. It was constructed in the mid-1800s by a farmer as a shelter for his family during wartime. The legend goes that when the farmer returned from the war, his family were missing and never seen again. The farmer is said to have encountered a terrifying supernatural force inside the house and fled in fear. Locals say they sometimes see a candle burning in the window of the structure despite it being locked and empty.

A tormented history of family tragedy lies behind the grand facade of this 19th century mansion. Built for William Larnach, a prominent politician, it has 43 rooms plus a beautiful ballroom, which was created for Larnach’s beloved daughter, Kate. The grand building did not bring the Larnach family happiness. Unfortunately, Kate died of typhoid fever at the young age of 26 but her ghost refuses to leave the ballroom she loved. William's first and second wives died untimely deaths at the castle. While William Larnach shot himself in the head, reportedly after discovering an affair between his young third wife and his son from his first marriage. Unsurprisingly, considering the heartache connected with the building, visitors report plenty of ghostly activity, including 30 sightings of spooks.

An attractive Art Deco hotel on the waterfront, The Masonic Hotel, has survived two earthquakes and a damaging fire. Over its more than hundred-year history, the hotel has seen guests pass away under its roof from natural and not so natural causes. Unusual places to shuffle off this mortal plane, include a chef who died in one of the hotel's bath tubs, and a regular visitor who expired in one of its elevators. Reports of apparitions as well as mysterious music and flickering lights have been associated with this haunted building.

Atmospheric and beautiful, this bay on the northern tip of New Zealand's North Island is a magnet for supernatural seekers. A sacred place in Maori culture, the bay is said to be a bridge between this world and the spirit world. Legend says that the spirits of the dead gather on this peninsula to jump from this world into the next. A spooky and spectacular spot for certain. 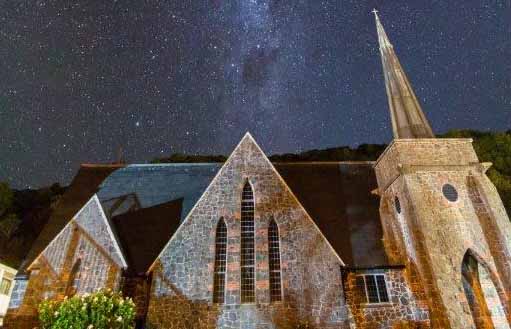